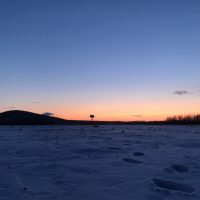 This library is about winter outdoor sound in Hulunbeier, produced by Digimonk in 2019.
Hulunbeier is located in inner Mongolia, northeast China. it is very very important in Chinese history, People went out from there and changed the history for many times. It was the birthplace of Xianbei, Tartar. It’s the homeland of Genghis Khan and he build the largest country in the history of the world. Now Olunchun and Mongolian still live there. But most of them have given up nomads life. At north side of Hunlunbeier, there is a mini city named Genhe. This place records the lowest temperature of China, -58c. When I was on the very high quality roads between towns there, only few of vehicles passing by. And they all were rushing to the south side because it’s too cold in winter. Even today, there are still some shamans you can find at there.

-Surround option include all Stereo files

-Under icelake and ice breaks

-Cold wind you can easily feel from the sound

-Foosteps on various depth and tightness of snow field

-2 versions of Stereo from MS and Stereo Pair

The library was recorded under -27c. The Hulun lake has been frozen at the end of Nov. We broke a hole on the ice and put the Aquarian hydrophone into it. Wow! Can’t believe that ’s another world under the ice. The lake is still hardly freezing in that season. And we can clearly hear it now. During middle of Dec. and the next March, the lake will be much quieter. After that, the early spring season, when it’s waking up, there will be more sound under the ice. But that will be dangerous to get on the surface.

In the snowy forest and prairie, I finally got that kind of mysterious howling wind sound. The interested thing is that, DPA 4061 stereo pair with Rycote Lavalier Windjammer works very well against strong wind. And it captured more howling components from the super cold air. For some of the wind sound, I even did a mixed version of the wind, since each mic setups got such different sound.Also the footsteps on snow, Schoeps and DPA got very different sound and they both are pretty good! So they are kept in the pack. The 98WH Swit battery was not such stable under such low temperature. Once time, even it’s gone in 30 minutes. And another two N-750 battery worked well. The heating pad is useless in that kind of frozen environment unless you keep running 833 in car or a warm place and then bring it out to record. Then it willkeep devices heat for longer time. Because 833 is quite hot if keep the power on. And heating pad doesn’t create heat by itself.

In the forest, After years of hunting-forbidden and logging policy, it’s too easy to find lot of footprints by various animals. Fortunately, a hawk got interested with my Cinela windjammer cage. It flied by and screamed in the forest, with very beautiful echo. You can find that ambience tracks in the pack.

I will come back to this place for more times in different seasons. to record Multi-channels under-icelake sound,  reindeers and horses, and the life of local herdsmen.