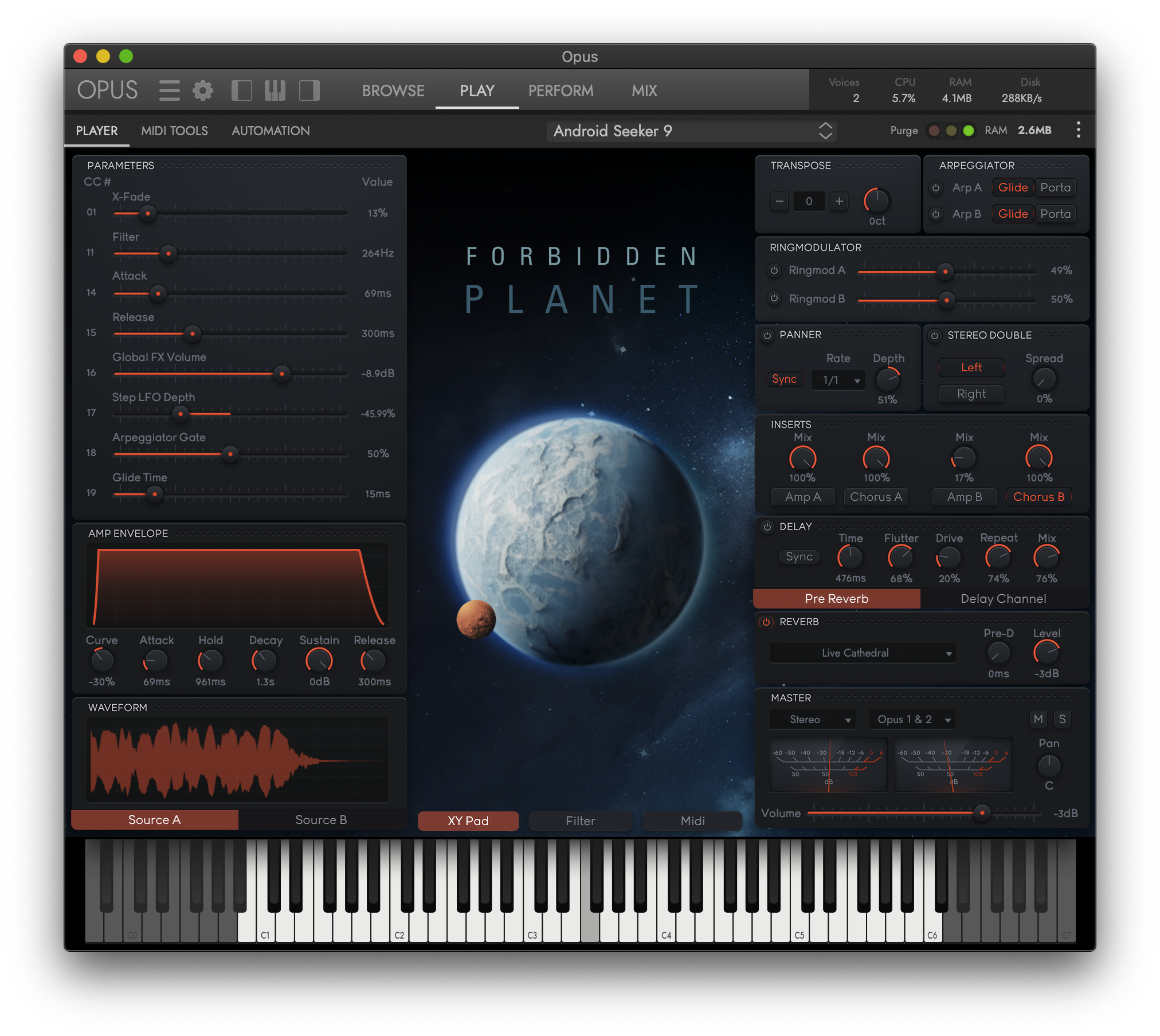 FORBIDDEN PLANET features over 600 expertly crafted morphing synths across categories such as Arpeggiator, Bass, Drones, FX, Leads, Pads, and Poly Synth. Freely morph between electronic layers, acoustic instruments, and futuristic sounds – perfect for soundtracks, EDM, hip hop and more. Featuring a brand-new suite of post-processing and mixing tools, insane filter modulation, and an extensive rack of effects, you now have the ability to break away from everything that has come before with new controls, powered by the critically-acclaimed OPUS engine, that offer unprecedented sonic shaping power with presets completely customizable by the user.

A SYNTH PLUGIN FOR THE FUTURE 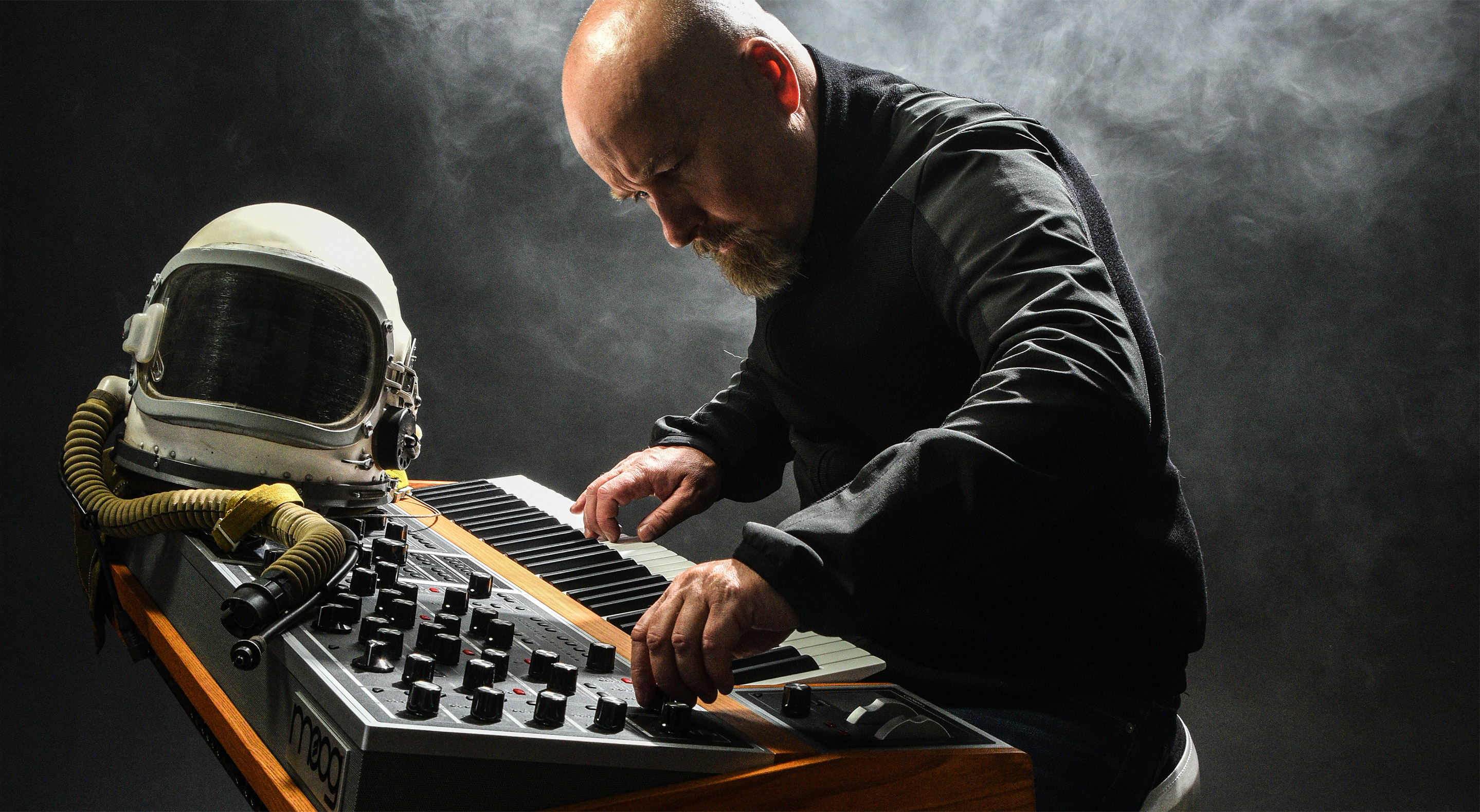 The idea for FORBIDDEN PLANET started when producers DOUG ROGERS and NICK PHOENIX set out to create EASTWEST’s first fully featured synth collection, not based on traditional oscillators, but combining electronic synth layers with orchestral, world instruments, choral samples, sound effects and more into one enormous collection — creating a new sound palette designed for the future, not the past. Producers Rogers and Phoenix were dissatisfied with most synths, which typically had a small percentage of usable patches and a lot of filler. Now with the new OPUS engine, they had all the tools they needed to create the ultimate collection of cinematic inspiration. Everything was meticulously captured with a state of the art analog signal chain, resulting in the fattest analog synths on the planet.

Crossfade between sound sources and filter settings with the central XY pad, allowing you to capture morphing hybrid sounds in moments. By moving the Orbital Control, you can dynamically capture broad but smooth shifts in both timbre and frequency content. Moving left and right changes the blend amount between two contrasting sources, chosen from analog, acoustic, synthetic, and large-scale cinematic sounds. The vertical position controls filter frequency and is perfect for creating sweeping gestures, manipulating the output however you see fit. 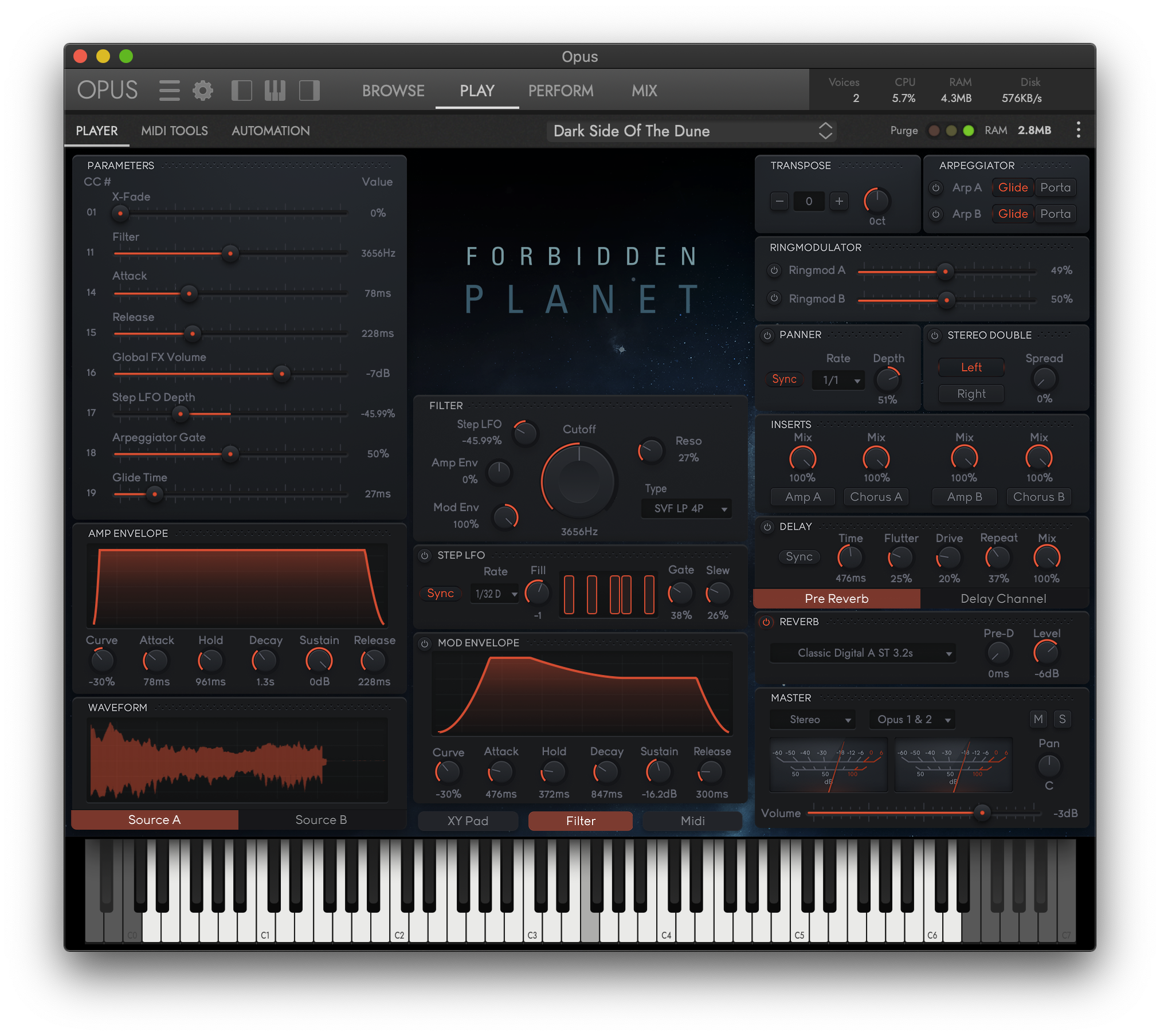 The XY Pad isn’t the only way to control the filter — simply pull up the filter section of the UI and you can pop open the hood, controlling the modulation depth. The Mod Envelope allows you to add an ADSR-style envelope onto the filter cutoff, automating its movement with each note, while the Step LFO section produces a gated rhythm as the sequencer modulates the filter cutoff frequency. This leaves you free to play with the XY Pad, creating progressive textures and drones to set the tone of the atmosphere you want to build. 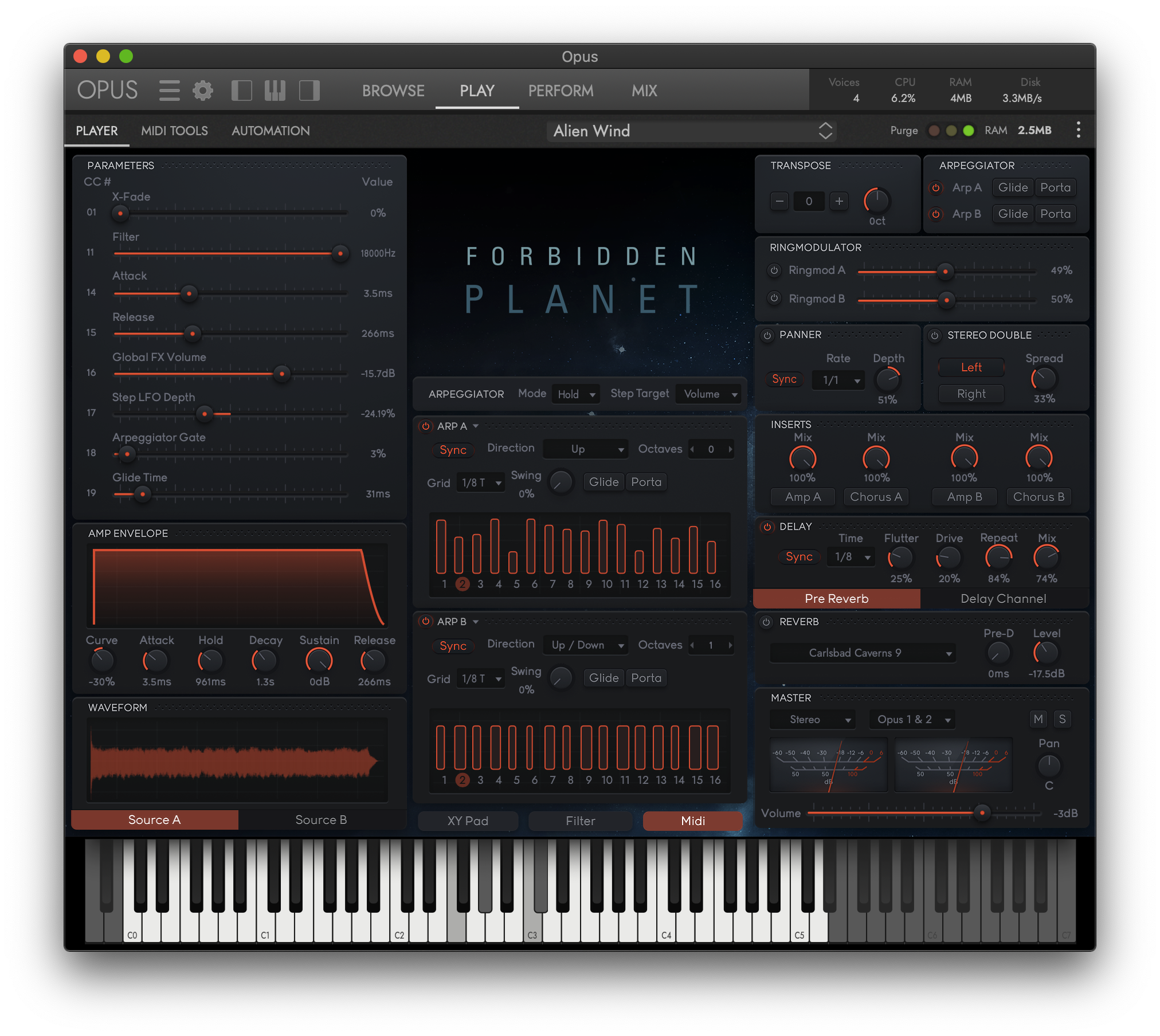 The arpeggiators allow you to create staccato and legato patterns, even with portamento or glide as you like. Not only does this make it easy to create highly dynamic and choppy ostinatos, but each of the 2 sound sources gets its own sequencer with the option to desynchronize their speeds. The two are adjacent to each other in the UI, giving you unprecedented automation capabilities without digging through multiple different submenus. Copy settings between both and you can produce slight variations that support more depth, creativity, and shimmer than you’ll find anywhere else.

A dual arpeggio structure allowing any rhythmic combinations you like across both layers. You can create polyrhythms, sync rhythms together, or even choose one layer to sustain while the other sets a rhythmic foundation.

You don’t have to accept a simple analog bass emulation and call it a day. Forbidden Planet’s basses are layered with FX pedal tones, contrasting crossfades, and gritty overtones perfect for tackling the most ambitious soundtracks.

Mechanical, organic, and environmental drones you can use to create any atmosphere you choose. This is where the XY Pad shines, producing original and morphing ambiences in real time so you can set the stage however you choose.

A collection of effects that defy classification, obtained from voices, acoustic instruments and a variety of synthesized sources — these are ideal for adding tension, noise, and chilling one-shots to accent the soundscape you build.

Pure sawtooth and square leads are quickly becoming outdated, so we wanted to give you a tool for creating organic, adaptive leads that pop out in the mix. Spend less time designing leads and arrive at the perfect lead instantly.

Use the XP Pad to shape warm, ambient, or gritty pads and morph between cinematic textures effortlessly. Whether you need to create a solid backing of chords or build a dramatic soundscape, you’ll find all the analog hybrid pads you need.

A collection of presets that don’t fit neatly into any one category, perfect for experimentation and bridging different styles. When you want to be surprised while still having fine control over the result, this will become your go-to.

WHAT WILL YOU CREATE?

You don’t have to design synth patches from the ground up or settle for outdated analog-modeled hardware sounds. Forbidden Planet was designed to give you unfettered access to cinematic sounds rooted in classic film literature, now with the ability to manipulate, process, and combine them with hundreds of electronic and hybrid instruments out of the box. You’re up and running in moments, with the option to make modifications to your heart’s content. Every preset combines contrasting dramatic sources, making it a perfect source of inspiration on demand.

EDM, sci fi, horror, world, hybrid music and more — Forbidden Planet gives you the tools to bring them all to life without limitation. 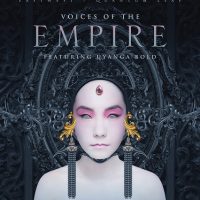